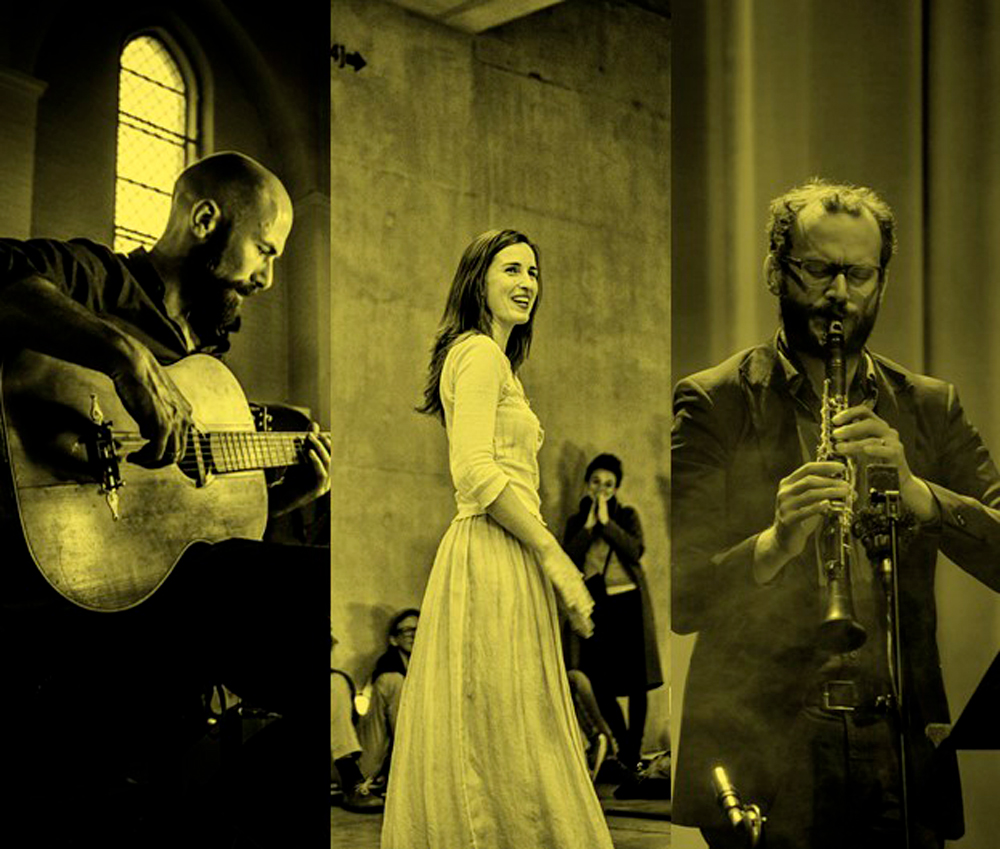 Danish and German artists at work!

The trio - occupied with the relationship between sound and movement - works with an intense contemporary chamber-musical expression infused with Almut Kuhne's exceptional voice and surgical precision, Francesco Bigoni's motion controlled processing of his horns and Mark Solborg's prepared acoustic guitars.

During the Danish/German friendship year of 2020 guitarist and composer Mark Solborg invited the virtuoso german singer to join him and Italian reedman Bigoni at the Willumsen museum for interpretations of the works of Willumsen and German painter Kirchner. In 2022 the collaboration continues across the Danish/German border. Supported by a research grant from Goethe Institut Dänemark and the Neustart exchange platform (neustartmusik.org) the three will present their work at Copenhagen Jazzfestival, Cologne Jazzweek a.o. A new album is in the pipeline for 2023.

Almut Kühne is an extremely versatile and genre-breaking vocalist. With amazing technical skills and register she works with both contemporary jazz, improvisation, new music and inspirations from the renaissance. Kuhne is educated at Hanns Eisler Music Conservatory in Berlin and grew up in a family of visual painters that introduced her to the „Blaue Reiter“ and „Brücke“ painters. Inspired by the arts she often incorporates visual components in her projects and concerts. http://www.almutkuehne.de/Mark Solborg has through 23 albums with original music and an impressive amount of concerts worldwide made clear imprints on. The Danish and International scene for contemporary jazz, improvisation and new music. Partners in crime include Axel Dörner, Paul Lovens, Thomas Lehn, Evan Parker o.a. Solborg is educated at The Rhythmic Conservatory, Copenhagen and New School University, New York. His work has been nominated and awarded by The Danish Arts Foundation a.o and has received extensive International praise for it’s vison and integrity. http://solborg.dk/Francesco Bigoni is based in Copenhagen and has during many collaborations in award-wining projects like Maria Faust, Håkon Berre o.a., established himself on the Danish scene as a strong and visionary instrumentalist and composer. Bigoni is in many ways occupied with sound: Besides his education from the soloist class at The Rhythmic Conservatory. Copenhagen he also holds a degree as electro engineer and is active within electro acoustics and interaction. https://francescobigoni.tumblr.com/