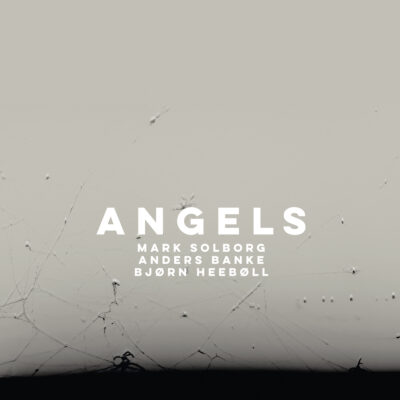 ...in recent years the Solborg/Banke duo has been working with drummer Bjørn Heebøll. His great taste, dynamics and melodic playing can be heard on this brand new 2021 release.

Angels come in many shapes. What for some is heaven-sent is the devil in disguise to others - while reality might be found somewhere in between (?). The pure of hart and righteous, those who help in hours of need, the fallen, the vengeful, the sanctimonious, the self-sacrificing, messengers and contact-personel between earth, heaven and hell, dead canonized forefathers, saints, archangels..
..and those who sing.

The approach of the trio is, in many ways, rounded and inspired by this celestial musical kaleidoscope. Thorough attentive, synergistic and dynamic interplay, the focal point is always at how to redeem the material at hand in the strongest possible way - regardless of genre. Over time they have developed a deep mutual understanding and - in the words of some listeners - telepathic playing style. As if all in the group breathes through the same lungs - and create transparent elastic music. This is a place of thorough, respectful, curious listening and musical talks.

The last years the group has worked two main agendas:
A - Original works focusing on melody, counterpoint and complex rhythm
B - Interpretations of selected favourite songs by strong historical voices

On Angels both are intertwined in an intense and dynamic three-way conversation. All contribute with equal voices - and on these tracks in particular you can hear Heebølls energetic and ultra melodic answers to Solborg and Bankes playfull interwoven lines and melodies. Besides Albert Aylers elegiac “Angels” you can experience Nick Drakes “Harvest Breed” exposed to bass clarinet, a rocking version of Monks “Misterioso” and “Crepuscule With Nellie” - mixed with new works like “Rigors Remain” and “Early Morning Bells” by Solborg and “Den 7. Dag” by Banke.

"These angels sure know how to sing, and sometimes even to dance. The trio sounds as if Solborg, Banke and Heebøll breathe through the same lungs. .. the delicate and transparent tonal architecture for three intertwined voices can really make the angels rejoice."
Eyal Hareuveni, Salt Peanuts

“Early Morning Bells [by Solborg] opens with investigations of guitarsound and timbre by Solborg, until Bjørn Heebøll joins in and the graceful depths of Anders Banke’s bass clarinet leaves me with one word in mind: Wow!…." - Louise Rosengreen, Dagbladet Information

The Monk reinterpretations are excellent, substantial and dense. Among the originals, the same applies to "Rigors Remain" and "Longsome", where one is slower and more sparse and the other is more urgent. "Angels" is brought on much more abstract grounds than Ayler himself would have dared; this frees the tune and makes it reach enjoyable heights.

Ultimately, this album is worth of attention for its strong coherence and cleverly outlined aesthetics.
- Alberto Bazzurro, All About Jazz, Italia

"With rounded depth, synergy expressed among the trio members often takes the form of broken octave elaborations, with poised cymbal taps, ripened reed vibrations and tangy guitar strums. There’s vitality within the eiderdown however, as demonstrated on tracks such as “Early Morning Bell” and “Another Bastard”. The former harmonizes finger-style guitar breaks and woody chalumeau puffs from the bass clarinet to personify breaking dawn, while the latter manages to evoke Paul Desmond and Jim Hall duets via clarion sax slides and focused string comping, yet drum rattle confirm that the theme is more than lightweight. Probably the strongest indication of the trio’s covert strength is the recasting of the Albert Ayler-composed title tune. Featuring broken chord call-and-response among reed shrills, pinpointed guitar strokes and drum clattering, the three make the exposition sway up and down as well as thrusting it forward. The result is a reconfiguration of the narrative as a gentler piece that retains the vitality of the original."
- Ken Waxman, Jazzword.com